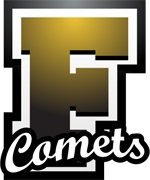 During Fallsburg’s basketball game against the Liberty Indi­ans on February 15, the school and the community jointly cel­ebrated the Lady Comets’ last home game of the season. Oth­erwise known as Senior Night, the Fallsburg community con­gratulated the team’s senior players on their last season as Comets. This year, only two se­niors graduated from the girls’ basketball team, Mya Grey and Diavian Smith.

Just like many of their team­mates, Ms. Grey and Ms. Smith were longtime members of the girls’ basketball team. They both began the pro­gram at a very young age and have grown up on and off of the court with many of the other girls.

“I feel happy and sad at the same time, said Ms. Grey, a power forward. “I’ve been with most of these girls since I first started basketball, and to know that high school basketball is over is kind of saddening. On the bright side, I’m very proud to say that we’ve accomplished a lot together as a team. I be­lieve that after I graduate, these girls have so many more great things coming their way.”

“I remember when I was a freshman trying out for the var­sity team,” added Ms. Smith, also a power forward. “It feels so unreal now, I can’t believe that I’m actually graduating and this will be my last year of high school basketball.”

According to Ms. Grey, she would like “to see them ac­complish way more than just sectionals every year. And I hope to see more than just one person reach one thousand points.”

As for Ms. Smith, she hopes that they will make it farther than her own ex­perience on the team, accom­plishing every goal they target. Both senior girls agreed that the team should continue to keep up the good work.

Winning their Senior Night game against the Liberty In­dians by a score of 63-39, the Lady Comets have already successfully qualified for the Section 9 title for their seventh year in a row, with the date of the game and their opponent still to be determined.

Nonetheless, we wish them great luck competing for a title that they’ve worked so hard to achieve all season!