What does it mean to make a New Year’s Resolution anyway? A resolution is a definite or earnest decision to do something; usually made with a certain amount of determination. Although the custom of making a resolution is most common here in the Western world, resolutions take place all over the globe. In fact, resolutions have been part of harkening in the new year for the last 4,000 years! 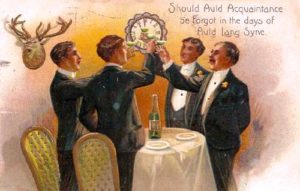 The ancient Babylonians are said to have been the first people to make New Year’s resolutions, and also the first people documented to hold celebrations for the New Year. Although, these celebrations were held in March when crops were planted; signifying a new harvest. During a massive 12-day religious festival known as Akitu, the Babylonians crowned a new king or reaffirmed their loyalty to their reigning king. They also made promises to the gods to pay their debts and return anything they had borrowed. If they kept their word, their gods would bestow favor on them for the coming year. If not, they would fall out of the gods’ favor.

In ancient Rome, after Julius Caesar re-invented the calendar and established that January 1 would be the beginning of the year in 46 B.C., January would then have special significance for the Romans. Believing that Janus (one of the Roman gods) symbolically looked backwards into the previous year and ahead into the future, the Romans offered sacrifices to the deity and made promises of good conduct for the coming year.

For Christians, the first day of the new year became the traditional occasion for thinking about one’s past mistakes and resolving to do and be better in the future. In 1740, the English clergyman John Wesley, founder of Methodism, created the Covenant Renewal Service, most commonly held on New Year’s Eve or New Year’s Day. Despite their religious roots, New Year’s resolutions today are a mostly secular practice. Instead of making promises to the gods, most people make resolutions only to themselves, and focus purely on self-improvement.

The traditional song for ringing in the New Year in almost every English speaking country in the world is Auld Lang Syne. This New Year song is generally credited to Robert Burns, but earlier versions of this ballad predate his time. Burns combined a common Scottish folk song with his own lyrics to arrive at the version now commonly sung on New Year’s Eve. Auld Lang Syne is about old friends who have parted and meet again. To celebrate their long friendship, they share a drink together and reminisce of memories from long ago. The basic message is that we should not forget our old friends and should celebrate a reunion with them.Are New Year’s resolutions successful? No, usually not. Unfortunately, fewer than half of us set resolutions, and less than 10% of us are actually successful. While interviewing people about New Year’s resolutions, I found that most people don’t believe in them, only because they tend to get upset with themselves for their lack of success when they fail. So, something that starts out making us feel good about ourselves, in turn makes us feel bad. Those people who were excited about setting new resolutions were doing so because everyone else was. One person explained it like this, “Yes, we can set goals any time of the year, but it’s incredibly powerful to know that everyone is on the same page. No matter where you are in the world, everyone is getting a fresh start as we enter the New Year. That unity is worth something. It feels good to know we aren’t alone in our efforts.” That’s one way of looking at it.

Is there anything we can do to make sure we are more successful when it comes to setting resolutions and attaining our goals? First, I think the person quoted above is on to something. The feeling of unity is empowering and indeed important. So if you can find someone who has the same resolution, it’s a good idea to compare notes, and keep each other motivated by holding each other accountable. When you check in with someone on how you are progressing, you are more likely to follow through.

Secondly, it’s good to write things down. When you have to stare at your progress it’s always right there. Those who keep a journal tend to be more successful. Those who stick to fitness goals often use a phone app, or a white board to write down progress. Another example of this would be a “vision board” Cutting out pictures, and quotes, can be incredibly inspiring on those days when you are falling off track.

Finally, it’s important to keep your goals small and attainable. It’s often too hard for anyone to go “cold turkey” when it comes to drastic change. For example, if you want to save more money, start by saving just $10 a week, and then up it to $20 and so on. If you want to lose weight, perhaps start by losing 5 lbs. When a small goal is achieved, then make another small goal. Before you know it, it all adds up!

That’s the thing about resolutions. It’s a marathon we are running, not a sprint. If we keep our eye on the finish line we will eventually get there.

I think for me, it’s always important to “get back on the horse” There will be bad days! There will be days when you “cheat” yourself out of what you set out to do. See that setback as a small moment, and not the entire outcome. Don’t beat yourself up. Let that moment pass, and try again tomorrow. Happy New Year to all of you! Whether you set a resolution or not, good luck in your endeavors! May 2017 bring you much happiness!