It’s time for overpriced roses, silly poems, and heart shaped chocolate boxes. I can’t remember the last time I celebrated Valentine’s Day. I guess it was something we “used to do.” Perhaps when our relationship was new and I was being courted I used to receive flowers at work. Fast forward through thirteen years of marriage, and I guess somewhere along the way it became a “Hallmark Holiday” that we just didn’t want to waste money on.

But, darn that candy is still good on February 15th, when it’s 75% off. Ok, so I guess I may participate just a little bit in the “economic chocolate boom.” 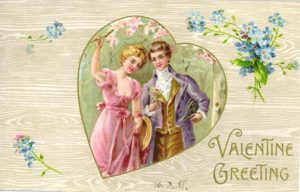 I really ought to give Valentine’s Day a bit more credit. It’s an ancient cel­ebration that has deep roots in romance and more impor­tantly, fertility. Valentine’s Day began with a pagan festival called Lupercalia. This festival, dedicated to Faunus, the Roman god of agriculture, originally took place on February 15th. The beginning of the festi­val would always start with animal sacrifice. They sacri­ficed a goat for fertility and a dog for purification. They would cut the goat’s hide into strips, dip them into the sacrificial blood, and gently slap both women and crop fields with the goat hide. The women welcomed the hides because it was believed to make them more fertile in the coming year. Later in the day, all the women in the city would place their names in a big urn. The city’s bach­elors would each choose a name and become paired for the year with his chosen woman. These matches of­ten ended in marriage. Lat­er, the festival of Lupercalia was deemed “un-Christian” by Pope Gelasius who fi­nally deemed February 14th Valentine’s Day. During the middle ages, France and England believed that this day was the beginning of birds’ mating season, which added to the romantic no­tion, and is perhaps where the term “Love Birds” came about.

Americans have been ex­changing hand-made valen­tines since the early 1700s. It wasn’t until 1840 that Es­ther A. Howland began sell­ing the first mass-produced valentines here in America. Back then, valentines were made with real lace, ribbon and colorful pictures. To­day, Valentine’s Day is the second largest card sending holiday of the year with 1 billion cards sent. Christ­mas is the largest with over 2.5 billion cards sent each year. I don’t know about you, but that gives me a bit of hope. I have been a little angry that the written letter, especially the love letter, has died out. I mean really, hasn’t everything become inbox messages and text alerts? There’s nothing quite like holding a letter in your hand, appreciating some­one’s penmanship, and per­haps even catching a whiff of their cologne or perfume. Now who is getting a little “romantic?”

Speaking of romance, and all things Cupid, do you have Valentine’s Day plans? It may be the busiest night of the year for most res­taurants. It’s the un-official “date night of the year.” So what’s cooking in our area? Pickled Owl, which is usu­ally closed on Tuesdays, will be open for Valentine’s Day. Evan, owner and chef, is working hard on a spe­cial menu. The atmosphere at Picked Owl is perfect for coupling. The ambiance there is warm, and there is a lot of candle light. While dining, you will be serenad­ed by good music; usually a live band. And one thing you can always count on is the very best dessert menu. Their desserts are always homemade, rich in flavor, and always a sweet way to wrap up your evening. Go­ing on a first date? Pickled Owl offers conversation starters, which you will find on cards in the middle of all the tables. These are a fun way to “break the ice.”

And don’t forget about Frankie & Johnny’s if your sweetheart prefers Ital­ian food. They have many choices, including steak and seafood. They have a tradi­tion of emphasizing dessert on Valentine’s Day by ap­preciating their customers with a little extra sugar.

If you’re staying in and just want to surprise your partner with something dif­ferent, why not stop by The Hurleyville Market and pick up a few packages of Aunt Nee Nee’s cookies? Aunt Nee Nee’s high qual­ity treats are sure to hit the spot, and are a great gift for teachers, co-workers, and children, as well.

I suppose Valentine’s Day is a good excuse to utter the words, “I Love You.” May­be we need more excuses to say it more often. Maybe this holiday gives a reason to show it, and not just say it. Maybe a good piece of dark chocolate and a glass of red wine is good for your heart. Maybe a bit of ro­mance keeps us emotionally healthy, makes us feel want­ed or young again. Maybe, just maybe, the very best valentines are handmade with crayons and markers; the kind of cards we hang on the fridge and then later tuck away safely in a keep­sake box. Maybe we all need something tangible to hold in our hand; a card we can pull out every once in a while. A memory that makes our heart skip a beat. May­be there’s someone you’ve been admiring who doesn’t know it yet. Perhaps Val­entine’s Day can be a corny reason for you to take that first step. Maybe that first step will turn into a life time of valentines? Guess you won’t know until you ask, “will you be mine?”

As for those of us who have stopped celebrating Valentine’s Day, well maybe it’s time to get mushy again. A little love never hurt any­one. Things have changed a bit, though. These days, I’d take a good nap over a good piece of jewelry. But if you see my husband, please tell him this for me: “Roses are red, pizza sauce is too, order me a large, heart shaped will do.”